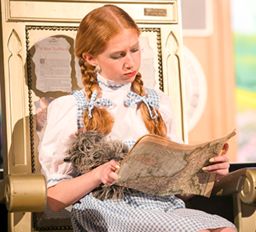 The Kids' Court Verdicts Are In!

In this year’s Kids’ Court case, The County of the Land of Oz vs. Dorothy Gale of Kansas, 6th Graders tried Dorothy for the murder of the Wicked Witch of the West. Students spent months examining evidence, preparing direct and cross-examination questions, and crafting their arguments to build and present their respective cases. The prosecution called as its witnesses, Aunty Em, Wizzie and Twizzie, Scarecrow and Dr. N. Chantress, while the defense called Gus T. Winds, Tinman, Cowardly Lion, and Glinda the Good Witch. Students in 2nd through 5th Grades served as jurors. At the first trial, the jury was hung, while after the second trial, the jurors found Dorothy not guilty!

We’re so proud of our 6th Graders for bringing this year’s case to life with their creativity and hard work. Thank you to our 6th Grade teachers and Performing Arts Team, as well as our parent (and attorney) volunteers -- Michael Lifrak, Lisa Stone, and Adam Kamenstein -- who helped our 6th Graders prepare their cases, as well as teaching them about our legal system.

The Kids' Court program at Laurence School was created by Head of School, Laurie Wolke, JD. It is one of the country's few mock trial programs for elementary-school-aged-children. It teaches students about the legal system and how it can be a vehicle for righting wrongs.  Through this unique, hands-on program, 6th Grade students try famous fictional and historical characters, such as Peter Pan, Willy Wonka, and Titanic Captain E.J. Smith. Sixth Graders play roles as prosecutors, defense attorneys, witnesses, judge, and defendant, while students in 2nd through 5th Grades serve as jurors. All participants consider evidence, witness credibility, and arguments presented at trial. It all culminates in the children rendering a considered verdict. This year, Kids’ Court was covered by ABC 7 News, which can be viewed here.