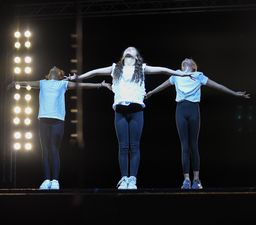 Last week, our 4th grade class led a school-wide celebration of Black History Month at our Red, White, Blue & Green Assembly, which included dramatic performances, song, and dance. Students shared the stories of important and inspirational African Americans throughout history, including Sojourner Truth, Henry "Box" Brown, Frederick Douglass, Harriet Tubman, Rosa Parks, and Ruby Bridges. They also sang "Lift Ev'ry Voice and Sing," written by the Johnson brothers to honor Abraham Lincoln's birthday. It was cherished by many, and during the Civil Rights movement, was coined the "Black National Anthem." During music class, students discussed the meaning of the song which helped the children to understand its importance.

The celebration culminated with an incredible dance performance to "Glory,"  by Common and John Legend. Fourth grade student, J.T,. introduced the dance, which honored the Selma March, as follows:

"In 1965, the Selma to Montgomery March was an important protest that occurred in Alabama. Protestors walked for three days to raise awareness for Black voters. The Selma March was 54 miles long and was challenging in every way imaginable. Today, we honor this time in history. As hoped by so many of the activists, that one day, there would be equality, today we celebrate that vision."

In addition to their studies in drama, music, and dance, the 4th graders spent time in class focusing on various diversity sessions, studying Black civil rights leaders, both past and present.

Click here to see the photos from the performance. (Stay tuned for the video.)

Throughout our library classes this month we have been focusing our research skill-building curriculum on looking at inspiring African American individuals who have made, or who are making, a difference in our world.

In 3rd grade, our students are learning how to use a print encyclopedia by researching some incredible people.  Working in teams, the student learned about, George Washington Carver, Marian Anderson, Maya Angelou, and Frederick Douglass along with a myriad of other incredible people, and then presented the person they studied to their classmates.

Fourth grade followed a similar curriculum but instead used our online Encyclopedia Britannica, which is geared more towards older learners. The 4th grade researched and presented to their classmates on such famous African American individuals as Mae Jemison, Selena Sloan Butler, Sidney Poitier, and Langston Hughes.  Special attention was given to Robert Johnson, blues musician, and his influence on blues music and rock n' roll.  Students listened to some great music, and had an opportunity to see and hear other musicians talk about Robert Johnson's influence.

Fifth grade had the opportunity to learn about the great Muddy Waters.  After reading the book, Muddy: The Story of Blues Legend Muddy Waters by Michael Mahin, students explored Muddy's tough upbringing and his impact on Chicago blues music. They truly enjoyed learning about and listening to some amazing blues music!

Lastly, in our Kindergarten through second grade classes, we read The Undefeated, written by Kwame Alexander and illustrated by Kadir Nelson, which just recently won the prestigious Caldecott award, given to the most distinguished American picture book for children by the American Library Association. The award was received for the book's "poetic tribute to resiliency, strength, and perseverance of the historical and present-day Black experience." We not only discussed the significance of why The Undefeated received this award, but we also learned about many awe-inspiring people in the arts, in sports, in politics, and in the sciences throughout this gorgeous book.

This month has been a journey into the study of those who continue to inspire us to be our best selves and make a difference in this world.