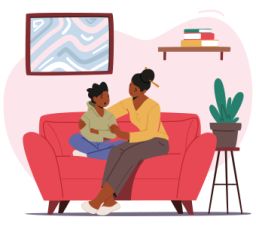 The Power of Positive Attention
September 29, 2021
Share to FacebookShare to TwitterShare to LinkedInShare to PinterestShare to EmailPrint this page

As we begin these first few weeks of school, take a moment to pause and give yourself a pat on the back--you've been juggling numerous responsibilities, shifts, and challenges while caring for others as well as yourself. Words cannot capture how difficult that truly can be. Sure, maybe things haven't been the best, however you've been doing the best you can in these ever-changing (read: never-ending) circumstances.

When we have to shift gears and put out fires frequently, our parenting as well as self-care resources can often become depleted, which in turn negatively affects our patience and response styles with ourselves and others. As humans, we're naturally more inclined to recognize mistakes, errors, and misbehavior in others, particularly our children. We also recognize the importance of learning opportunities, so when misbehavior is identified, it is instinctual for adults to want to point out and correct (often sternly) what children are doing wrong. Moreover, when we're feeling stressed, we tend to become even more reactive when addressing these wrongdoings, too.

What is Positive Attention

Research indicates that giving attention to behavior you simply expect or want to see actually increases the likelihood of that behavior occurring again more than identifying what you want children to stop doing. Using positive attention (sometimes referred to as differential attention) seems obvious, however it is not a natural response style and takes practice for it to become an effective or useful skill. What makes building this skill harder is that we are wired to recognize and tell others what not to do, instead of what to do.

How to Use Positive Attention

It is difficult and exhausting to use positive attention all the time, so below are some quick tips on how to use this type of attention to shape or improve your child's behaviors and coping responses.

Regardless of age, providing children with recognition of actions you appreciate and want to see more of, makes them feel good and proud. Over time, this will help foster a healthy self-esteem (sense of pride in one's actions), build independence, as well as become internalized as their own positive self-talk to help them overcome challenges. In essence, using positive attention helps children recognize tools and strategies that adults consider to be helpful and appropriate, which they'll then be more likely to do again in the future.

Another way to think about all of this is to reflect on our own experiences, even as adults. For instance, if we're going to a dinner party and someone compliments us on a dish we prepared, we're much more likely to use that same recipe for future gatherings.

What to Look Out For

Sticking with positive attention can get tricky. Life would be way too easy if we could do this once and have an automatic increase in desired behaviors. It usually takes a bit more effort and mindfulness from us, at least at the outset, for such desired behaviors to increase in frequency. This is because children tend to revert back to the behaviors or strategies they're used to using before doing something different.

Therefore, if you're child has learned that screeching and whining worked wonders in the past to get extra screen time or their favorite dessert, they'll likely first increase their use of that sort of behavior (called extinction bursts) before realizing it won't work anymore and they have to try something else instead, like using a calm, indoor voice or being kind to others at the dinner table. Alternatively, receiving positive attention feels uncomfortable at first for children, so they might misbehave initially because they're not sure what to do. Eventually, with your consistency, they'll come to understand it and the acting out or less desired behaviors will decrease in frequency as well.

This is where our patience and perseverance comes into play. Importantly, if you give in (and thus provide attention and reinforcement) while you're child has amped up their less than desired behaviors (i.e., screeching and whining), they'll then make the association that their behaviors have to be at that level or severity in order to get what they want again. This is where active ignoring can take the spotlight, which is what I'll touch on further in my next post. For now, I think this is more than enough to think about and practice! Thank you for taking the time to explore a way we can help our children grow (notice that labeled praise there?!).

Back to Dr. K's Corner