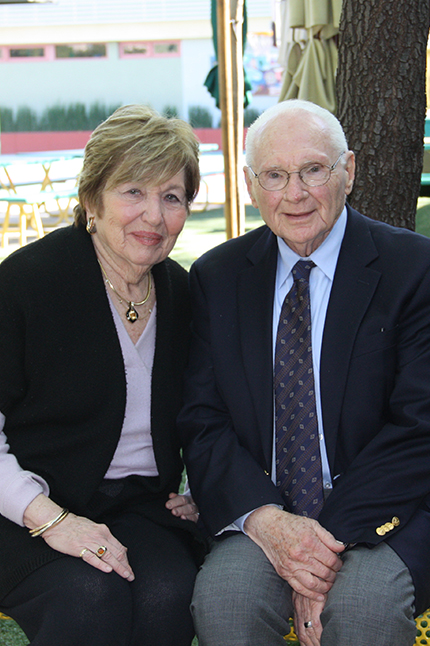 Founding Director, Marvin Jacobson, has been in the field of education for more than 65 years, almost all of which were passionately spent right here at Laurence—the school in which he founded and molded into the amazing place it is today: a campus which sprawls five acres, where 300 Kindergarten through Sixth Grade students love to learn every day. Mr. Jacobson always knew he wanted to work with children, and he went to New York University to obtain his Bachelor’s degree in psychology before attending UCLA’s graduate program in elementary education.

In 1952, a then young Marvin was approached by a group of parents whose children had attended his summer camp—one of his post-graduate undertakings. These parents saw such growth in their children over the short summer months that they urged him to start a school of his own, where their children could benefit from his “Total Child” philosophy which places emphasis on the performing arts, experiential learning, and global education, year round.

As it so happened, "Mr. J" (as the children affectionately call him) did just that—he opened a two room school house for 12 five-to-ten year-old students on his parents’ 3/4 acre property in Valley Glen, California. Two years later, he met his wife, Co-Founder, Lynn Jacobson, and the rest is history. The school flourished, changed, and reinvented itself for the next 61 years to stay on the forefront of education and to become the major success it is today—a place where students are provided a personalized, well-rounded education, that ensures their academic, social, emotional, and physical development. A place in which the students build character, explore the arts, science, technology, language, the world; a place in which they jump, play, read and, most importantly, grow.

Co-Founder, Lynn Jacobson, spent almost 60 years at Laurence School, where she worked as a teacher beside her husband and school Founder, Marvin Jacobson, before taking on administrative responsibilities, including overseeing the faculty and curriculum, until her retirement at the end of the 2015-2016 school year.

Mrs. Jacobson attended UCLA, where she was part of the undergraduate and graduate programs in education and later earned her teaching credential and degrees. She also holds a reading specialist certificate and has taken a multitude of classes in special education.

Throughout the years, Lynn has enriched the School’s curriculum by creating innovative units of study, including: Global Education, which she developed back in the early 1990’s to broaden students’ perspectives of our interconnected world, multicultural education, and energy and water. Mrs. J. was also committed to making learning meaningful, relevant, and rewarding to all children- a legacy that will live on at Laurence long past her tenure.

Together, the Jacobsons share a love for their daughter, Laurie, and their two grandchildren, Jonny and Becky.